Remembering The Night of Broken Glass

The Power of Toads

We Can, If We Will

Everything in this manifest universe is connected to everything else, and experiencing the fullness of our own beauty and bliss depends on having a direct experience of this connection. This law applies at every level of our existence. Nature is the manifest form of the Divine Mother, the transcendental ocean of beauty and bliss. To enjoy her protection, love, and care, we must live in her lap. The more we distance ourselves from her, the further we distance ourselves from divine love and protection. Exploiting nature is like abusing our own mother. Out of ignorance we fail to see that we are constantly receiving nurturance from the sun, moon, stars, air, fire, and water. We are made of these forces; they are integral to us. Even the force of gravity is a form of sentient love emitting from the heart of the planet. It holds us fast to the bosom of the Earth. Punching holes in the ozone layer is like drilling holes in our skulls. Destroying the forests is like hacking away our own limbs. Allowing the soil to erode is like ripping off our own skin.

In creating, the only hard thing is to begin;
a grass blade's no easier to make than an oak.

In a plutonic universe, in which the outer is simply a reflection of the inner, or perhaps more accurately is the inner seen outerly, there is no point in changing the mirror if we do not like what we see in the glass. That is, our world and its condition are a consequence (manifestation) less of how we treat it and more of how we perceive ourselves, how we answer the question “Who and what am I?”

So then, why have a page on The Zoo Fence devoted to eco-consciousness, whose principal focus would seem to be on the outer wounds suffered by the planet and its ecology, when we make such a fuss on virtually every page of this website to demonstrate that all of the real work has to be done within?

Because as seekers it is at least hypocritical to claim to be reaching for an awareness of our True Nature, which we perceive to be infinite divinity, whatever precisely that might mean, and at the same time to be treating disrespectfully an environment which we know, or are seeking to know, is a direct manifestation of ourselves.

implications of that equation as they relate to our opinions, actions, and lifestyle.

In a word, how can we claim to be seeking to perceive the Divine in all that is, to recognize everyone and everything as sacred, and at the same time to be treating any of it disrespectfully?

To that, of course, we respond quickly (not to mention, I suppose, a little defensively) that it's others, not we, who are treating the environment disrespectfully. But in a plutonic universe, if they exist on the outer, then their tendencies exist somewhere within us; and so, at the very least, we need to rid ourselves of those aspects.

Virtually all of the Teachers tell us that the only truly meaningful way to rid the world of its ills is to Remember Who We Are. When we Realize the Truth, they insist, the world – for good or ill, always a reflection of ourselves – will reflect that Awareness and be Healed. But even as we reach for that Awakening, clearly we need to adopt positions and practices which honor that high goal. (Editor's Note: This paragraph generated the thread Know Thyself at TZF's Open Forum.) 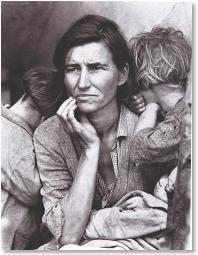 The Eco-Consciousness pages of The Zoo Fence are about the planet's environment, the pollution that threatens its health, and the efforts necessary to redress the damage and restore balance.

Surely the most dangerous form of pollution is hatred.

The February 2002 issue of Smithsonian Magazine features a story about hatred that is at once disturbing and inspiring.

It began in September, 1957, at Central High School in Little Rock, Arkansas. The US Supreme Court had mandated school integration, and the Governor of Arkansas had chosen to resist. Nine black American youths attempted to enroll. A crowd of white students and adults responded in anger, venting hatred.

Among the black youths was Elizabeth Ekford, and among the white youths was Hazel Bryan Massery. In this extraordinary photograph, a Pulitzer Prize runner-up, the two appear, Massery (center, mouth open) taunting and jeering, Ekford (at right) exhibiting “courage and grace”. 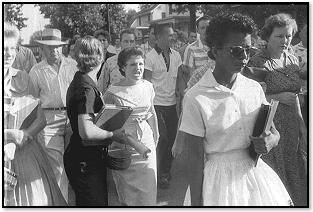 Imagine the destruction and pain caused by that hatred, to the individuals involved, to the nation, and to the planet. And yet, awful as it was, it has been repaired. Six years after the event, Massery telephoned Ekford and apologized, and in 1997, forty years after the confrontation, the two met again at the school, in person in peace. 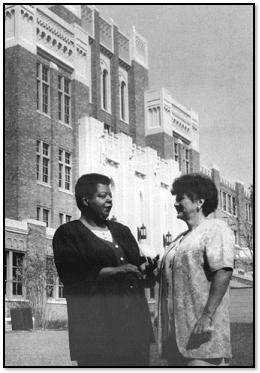 If they can, we can. Whatever anger and hatred each of us harbors is destroying us and polluting the planet we inhabit. We can release it, and channel that energy into healthier, more constructive directions. If we will to do so. Will we?

A character on the Public Broadcasting Service television program Foyle’s War (1:3), quotes another on the subject of hatred,

Do not go into that dark place. Fear it. Fear the embrace that awaits you,
For you must know it touches once and then will not let go.

The Power of Toads
by
Pattiann Rogers

Editor's Note: This cartoon was inspired by a comment on the subject attributed to Prince Philip, Duke of Edinburgh.