This is a part of a letter to TZF’s good friend, Elsa Joy Bailey, written in response to a question about making mistakes (she had snapped at a colleague at work, and was concerned about it).

First, of course, it must be said that snapping at a co-worker when you’re under pressure is so normal as to be hardly worth noticing. Thus, my immediate response would be, unless you’re snapping every day, leaving tears behind you everywhere you go, which you obviously are not doing, then I’d urge you not to overstate this. Instead, recognize there is still work to be done, apologize to the person if that’s warranted, and walk on.

But beyond that, there is the larger question you raise about your spiritual progress. This is something which haunts all seekers. It is a good thing, because it keeps each of us on our own case. But, too, it is a nuisance, because it unnecessarily discourages and disappoints us. Ultimately, the question here is, where does one take refuge when doubts arise?

In some ways, Nancy and I are a little schizophrenic spiritually. On the one hand, we follow the path of the mind or of understanding (jnana yoga, as it is called in Hinduism), endlessly questioning “Who am I?” and endlessly rejecting every partial answer. For us, this way is best articulated by the likes of Nisargadatta, Ramana, and Krishnamurti.

From that perspective, the question we ask ourselves when, say, we snap at someone, and wonder why, is “Who’s wondering?” Clearly, the One (God or whatever), Which is our True Identity, is not wondering, so it has to be “the illusionary other,” the egoic mind, the “me” part. That is, the apparent object of your question is actually the subject of your question! And it’s asking only because it thrives on the approval of others, something which snapping puts in jeopardy. Thus, the concern it raises in this question has nothing to do with your spiritual progress, but with its self-image. It has made you feel badly so that you won’t do that again so that it won’t feel threatened. As Krishnamurti might say, “See what your mind is doing to you!” In a word, do not take the question seriously, for it is simply a symptom of itself.

On the other hand, Nancy and I are also followers of the path of the heart or devotion (so-called bhakti yoga), best articulated for us by the likes of Jesus in the Gospels and Ramakrishna. Here, the seeker is a child in the arms of Mother, and all our questions, all our doubts, all our fears are simply put to Her. Thus, we say to Mother, “My creation, whatever exactly those two words signify, was Your Idea. Therefore, it is Your Responsibility.”

That’s it. With those words said (and meant–that’s the hard part!), we are free. Never again do we need to worry about what to do, what to think, where to go, what to say, or even how we’re doing. Having returned our life to Mother, whose it is and always was anyway, we are free simply to live it, which, if you think about it, is the only thing we are really able to do anyway. As Jesus put it so aptly, who among us can even do so simple a thing as alter a hair on our head?

Here, free of all life-management fears and concerns, we can relax in a way we have never done before. Everything becomes less frightening, crucial, urgent, important. The people in our life even begin to look different. Gentler, friendlier, less threatening, less other. Mother’s in Charge, so whatever happens is okay by definition. The Universe becomes a Classroom, life is the Curriculum, and Mother is the Teacher. All we have to do is pay attention and play. Mother does all the rest. And the answer to all the questions which we all constantly ask, like “When will I get rid of the me part,” now becomes, “Who cares? Mother’s in Charge.”

Some say this is a cop out, and too easy. We respond, try it. It is far easier (if infinitely less effective) to continue struggling to pretend to be in control of one’s life than it is to surrender it absolutely and unconditionally.

How does it affect snapping at co-workers? First, we seem to snap less, because if life is Mother’s Problem, then it’s not our problem, so we don’t take it so personally. And, when we do snap at people anyway, which from time to time we still do, we don’t take that as personally either, so it’s easier to apologize, and release it quickly. You start to hear yourself thinking things like, “I just snapped at that fellow. I wonder why Mother had me do that? What does She want me to learn here, I wonder?” Do you see how that defuses the situation, and transforms it from a guilt-ridden, anxiety producing, self-flagellating potential disaster to a positive, growth-inducing opportunity. Next thing you know, you’re going up to the fellow, and thanking him for letting you snap at him! In time, you discover that you’re seeing your whole life that way. Mother Teresa used to say that the people she worked with, the beggars and lepers and so on, were all ”Jesus in a distressing disguise.” Seen that way, how could she not love them.

Living one’s life as I suggest here can have the same effect: It is all so evidently Divine (Mother’s Classroom), how can you not love it! To be sure, it may not always seem divine, but that’s why we’re the student, and She’s the Teacher. Until we can see it Her Way, we simply must take Her Word for it. That’s not always easy either, in fact far from it, but it is always a safe harbor.

So, whether you seek with the mind or the heart, the answer is, Remember God. Don’t fall for the trap of fretting about snapping. Instead, look up.

To know God is to love God,
therefore the paths of jnana and bhakti (knowledge and devotions) come to the same. 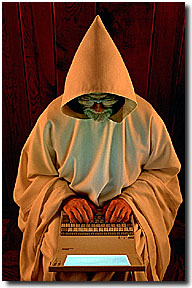 It is not the work that hinders,
but the idea that it is you who are doing it.