If You Meet The Buddha …

Often, in describing our relationships with others, we use the expression one-on-one, as in, “She and I talked one-on-one this afternoon.” In the context of statements like that, there are always two people involved, and a transfer of information back and forth.

In the spiritual context, meetings between a Teacher and a seeker are not in the least like that. Here, there is only one Person involved, for both members of a spiritual relationship share the same Identity. These relationships really are One-on-One! Of course, only one element in the relationship, the Teacher, knows it, but it is nonetheless true.

Also, despite appearances to the contrary, no information is exchanged, for in a spiritual relationship there is nothing to teach. We already know all there is to know; we just don’t know we know it. There are several exchanges in the Gospels that highlight this reality wonderfully. Consider, for example, Jesus’ insistence to his students (at John 14.4), “You know where I’m going, and you know the way.” There, his disciples at the time, hearing him say that, react even as we do today – in effect, a resounding “Huh?”

The Teacher’s role is not to impart knowledge, but to awaken the Knower. And the moment the Knower is Awakened, the moment the student Remembers his or her True Identity, the relationship with the Teacher instantly transforms into — or is instantly recognized as having always been — a relationship with One’s Self. Two become, or are recognized as having always been, One.

This is why every true Teacher tells his or her students (when and as the student is ready to hear it), “Do not look at me, look through me; consider not what you perceive but what I am.” Here again, we find Jesus, like all Teachers, repeatedly telling us “I am this” or “I am that”; but the “this” or the “that” virtually never relates to his personality, to characteristics of himself as a person apart from other persons, but rather to characteristics of himself as a Self-Realized Knower, as the One. Thus, he says things like, “I am the way,” “I am the truth,” “I am the life.” Likewise, in the Bhagavad Gita, Krishna frequently refers to himself with similar statements. We, of course, perceiving the universe personally, interpret remarks like that to be personal and specific descriptions of Jesus or Krishna or whatever Teacher may be making them. That is, we hear him or her to be saying he or she is the way or the light or the life or whatever, and everyone else is not.

But from the point of view of the Realizer, there is no such thing as “everyone else”. Consider this ancient parable: After a few years of spiritual study, a seeker, convinced she has deciphered life’s secrets, strides up to heaven’s gate and bangs on the door. “Who’s there?” thunders a voice from within. “It is I,” she replies, with certainty. “There’s no room for you here,” responds the voice, with finality. Surprised and disheartened, the seeker returns to her books and her practices. Some time later, she tries again, but with the same results. Eventually, after repeated failures, she gives up. She turns away from all she knows, and she cries – at first, in anger, then confusion, then surrender, and, finally, in joy. Now, she knocks on the door again. “Who’s there?” asks the voice. “It is You,” the seeker replies. The door opens.

Recall the remark by Jesus, “Where I am going you cannot come” (John 8.21). We cannot come not because we are denied access by some divine decree, for heaven is not a private club; but because we deny access to ourselves by perceiving ourselves and everything else, including the Teacher, including God, separatively. There is room “There”, in Realization, only for one, the One. Indeed, one might interpret Jesus’ otherwise unclear promise (at John 16.7) to his disciples that they will be better off once he’s gone, as meaning that, by remaining physically among them, he is a distraction. They cannot see the Truth the Teacher is, so long as they are fixated on the personality they perceive.

Just so, in the Buddhist tradition, it is said, “If you meet the buddha along the road, kill him.” That is, if we perceive the buddha to be outside of and separate from ourselves (”on the road”), we perceive erroneously, for in Truth there is no such thing as “outside of and separate from ourselves.” And so, that buddha, whether it is the historical Buddha, or Jesus, or a chosen Guru, or some other favorite image of the Teacher, must go if we are to see and to know ourselves as we truly are.

You and I believe we live in a universe composed of many people and many things. In Truth, we Live in a Universe that is a Single, Perfect Reflection of the One, which is God, the Very Self, even our own self. That is not only Where we Are, it is What we Are.  For our separative minds, this is all very difficult to understand, and so we cling to the old ways of perception.

But as seekers, we must be willing to release those. The buddha on the road, however beautiful, inspiring, comforting, and nourishing he, she, or it may be, reinforces our sense of being a unique, distinct, and separate egoic personality among umpteen billion other unique, distinct, and separate egoic personalities. And as such, it stands in our way. We must be willing to release that perception if we are to See. For, ultimately, it is the death of that perception which makes possible, upon which depends, our own re-Birth.


Adapted here from a story by Jalalludin Rumi, which we first read in the book “The Sufis” by Idries Shah (see TZF’s Bookstore), to whom our sincere thanks! (Return to text) 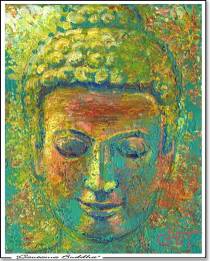 Look for Buddha outside your mind,
and Buddha becomes the devil. 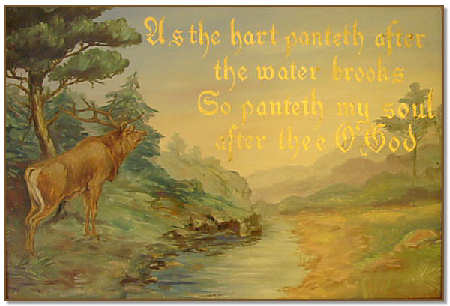 Who do you say that I Am?